The Microsoft Natural Ergonomic Keyboard 4000 doesn’t feel very “Mac-like”, at least not out-of-the-box. Read on for helpful settings to improve the experience, and a brief review of the keyboard at the end.

If your kernel panics, upgrade the drivers

On Snow Leopard (OS X 10.6), the IntelliType Pro 8.0 drivers caused me kernel panics at least once a day.

The recent 8.2 driversdon’t cause kernel panics on Lion (OS X 10.7). I haven’t tested them on Snow Leopard, but I assume it is the new drivers, rather than the new Operating System, that contain the fix. Readers have reported that the older 7.1 drivers work well with Snow Leopard (note that the 7.1 drivers say they are for the older Natural Keyboard Pro, but they also work for this newer keyboard). Let me know if you have tested other combinations of driver/OS versions.

Or don't use the Microsoft drivers at all

Ironically, the Microsoft drivers stop OS X from recognising the keyboard for what it is! Without the drivers, OS X reports “Natural® Ergonomic Keyboard 4000”; with the IntelliType drivers, it’s a mere “Keyboard”.

As the last straw, if you remap your Caps Lock key to Control via Apple’s Keyboard preference pane, with the Microsoft drivers installed the remapping will be lost every time you restart.

The following table should help you decide whether you want the Microsoft drivers. More detailed explanations follow.

How to uninstall the Microsoft drivers

If you don’t want to run the uninstallers, you can remove the following manually:

Swap the Alt and Windows keys

The Windows key is automatically treated as Command (⌘), but on Apple keyboards the Command key is next to the spacebar, with Option (Alt) the next key out. On the Microsoft keyboard this is reversed, and the IntelliType drivers helpfully have a setting to reverse these two keys; luckily OS X also has this functionality built in.

It’s under the Modifier Keys button of the Keyboard System Preferences pane.

Simply map Option to Command, and vice-versa. These settings are per-keyboard, so you won’t mess up your MacBook’s built-in keyboard.

While you’re here you can also map your Caps Lock to Control, if you so wish.

Use the Application key as a Command or Option key 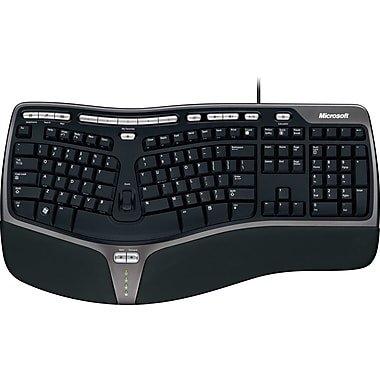 To the right of the spacebar, this keyboard has an “Application” (or Context Menu) key instead of a Windows key. The IntelliType drivers include a setting to treat this key as Command, but OS X has no such setting.

Apple’s customizable XML keylayouts only allow mapping key codes to output characters, but not changing or adding modifier keys. Graphical interfaces built on top of this mechanism, such as Ukelele, have the same limitations. You’ll need the open-source KeyRemap4MacBook.

In spite of its name, KeyRemap4MacBook works on any Mac (with OS X 10.4 or later). It doesn’t allow arbitrary key mappings, but, in the best open-source tradition, it does have zillions of settings. The one you want is under “For PC Users” » “Change PC Application Key” » “Application Key to Option_L” (i.e. left-option, not option+“L”). What you set here doesn’t seem to be affected by OS X’s own modifier keys remapping.

The keyboard’s mute, volume and play/pause keys all work out of the box, no IntelliType required. There are no keys for previous/next song.

(Without the Microsoft drivers) None of the remaining media keys work (web/home, search, mail, calculator, “favorites” 1 through 5, back and forward, and the zoom slider).

The Function keys (F1, etc) behave as such (as opposed to brightness, volume, etc), regardless of what you set in the Keyboard preference pane. If you press “F Lock” the F keys simply do nothing. Luckily the F Lock remembers its setting across reboots.

There is no Fn modifier key as on the Mac keyboards.

KeyRemap4MacBook allows you to map the F keys to the usual brightness, volume, etc. but then you’d lose the normal F keys.

On the Mac OS there is no such thing as an Insert/Overwrite toggle (even on Apple’s extended keyboard there is no Insert key). So unsurprisingly, the Insert key does nothing.

Delete works. Page-Up and -Down work. Home and End scroll to the top and bottom of the window instead of moving the cursor to the beginning or end of the line (but this is consistent with the behaviour of Apple keyboards) except in Microsoft Office, where Home and End behave as on the PC.

Num Lock doesn’t work, but fortunately it is stuck in the numeric mode.

I initially liked this keyboard: The split and tenting angles provide a comfortable resting position, it has Command, Option and Control keys for both hands, and the price is quite reasonable.

But after several months, I have stopped using this keyboard. It’s just too large! Keys like Return, Backspace, and Escape are quite far away from the home position. I don’t really need a numeric keypad (it forces the mouse that much further away). The keys are loud (especially the clunky spacebar) and the key travel distance (and the force required to press them) is more than I’d like.

These are of course quite personal opinions, and this keyboard could be just perfect for someone else. As a computer programmer I do a lot of typing, so I try to optimise for ergonomics. 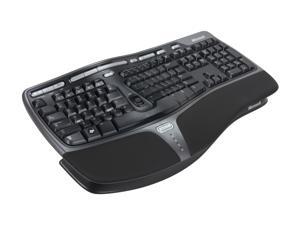 I really like having all three modifiers (Command, Option and Control) available to my left and right hands, though this may not be so important for non-programmers. I don’t think I’d buy an ergonomic keyboard without this feature. The Kinesis keyboards, and Apple’s own keyboards (except the Apple external keyboard with numeric keypad), lack the right-hand Control.